Let me take you back…about thirty years ago, to be exact. I spent a morning working down in my grandfather’s basement. Pop-pop had a full workshop from his many years as an engineer, and I think he was probably pretty happy that (even though he had granddaughters instead of grandsons), they were still interested in what he did. So we spent that summer morning building a cube. It was simple, it was easy, but, for me and my eight-year-old self, it was awesome. Later on, I drew flowers on it with a marker, and it disappeared somewhere down the line. But it was a big, solid block, and I think I even used it as a trashcan for a while.

Of course, Pop-pop was way better at it than I was. We still have one of the “Pop-pop chairs” in my house – one of the chairs made for my sister and me when we were little kids. They were awesome, and they’ve held up to years of abuse.

So, to me, making stuff is important.

Fast-forward. A few years ago, we got a big, comfy recliner to go in the bedroom. The only space for it was next to the bed on my side. The problem was that it was a bit bigger than we thought. It didn’t fit with the bed and my bedside table, so I moved my bedside table and began using a simple little IKEA table. It worked, and it fulfilled its purpose. But no matter what, it was a black, thin, fake wood (can it even be called “wood” with the word fake in front of it? And when it’s that obvious? And doesn’t that also imply that there could be some confusion and someone could somehow imagine that it was made of wood?).

More forward movement. I went away for my final residency at University of Tampa for my MFA in Creative Writing. And I came back to find something in the garage – Patrick had begun making me a table. Like from scratch. And from wood. Actual, honest-to-goodness pieces of wood that had once upon a time been part of a tree. He took some time to get it finished up properly, and just this past weekend, he finished it up and moved it into the bedroom, into its proper place.

Now let me tell you why it’s so awesome.

So, now y’all can see my awesome table and be all jealous of how awesome Patrick is. 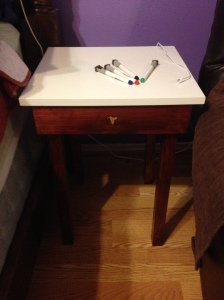