It was yesterday that I realized that I don’t care about Valentine’s Day.

Give me any other holiday, and I’m good to go. I even like Easter.

But Valentine’s Day? It has some kind of messed up messages.

Dear Couples –
Go out to a restaurant that’s super crowded, completely unromantic because of the crowd and the noise and the insanity, and if it’s a really “nice” restaurant, you’re probably paying jacked up prices for a limited menu. Once you’ve suffered through a dinner that is probably not exact the best thing you’ve eaten because the wait and kitchen staff are totally overworked and underpaid, go home exhausted and in a bad. And, hopefully, drunk. Collapse into your bed.

Ah, the romance of Valentine’s Day!

And here are some memes to keep you happy. 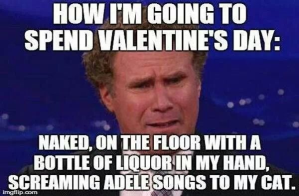 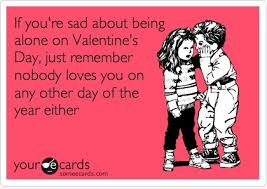 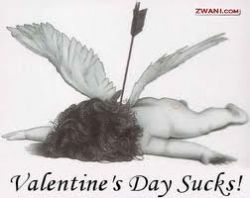 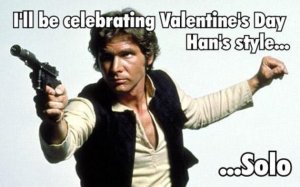 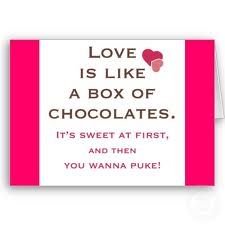 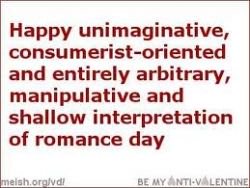 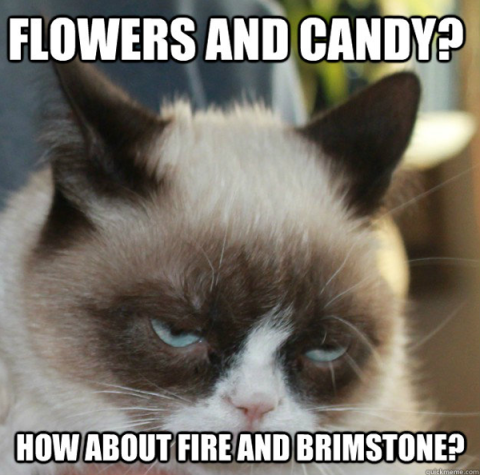 (Unfortunately, I did not find any attribution for them, so if they’re yours, please let me know so I can fix that ASAP.) 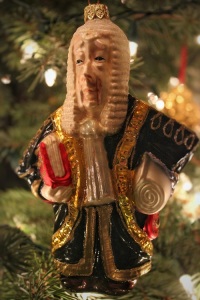 I caught myself being one of those people

You know what I mean, right?

I caught myself being an asshole.

I was at Target. I was in a hurry. And Target – being Target on a school day around 2 p.m. when all the moms are trying to buy their groceries before their kids invade their houses again – well, Target was overwhelmed and understaffed.

In front of me was a woman, cart full of baby stuff. She had a super-nice Michael Kors bag, and she was using a WIC card to buy her baby stuff.

I jumped to the conclusion that she didn’t deserve the bag, that if she had the money for the bag, why was she on WIC?

Okay, I told myself. Maybe it was a gift. Maybe she got it from a thrift store. Maybe… Well, maybe it wasn’t my business in any way, shape, or form.

Just because she is getting help doesn’t mean she doesn’t deserve some fun and some luxuries. It doesn’t mean that she should be punished and constantly struggling.

She isn’t any less worthy than anyone else.

Why couldn’t I assume that she worked hard – maybe harder than me and everyone else I knew – and that she was just screwed over by life?

I hope that other people aren’t assholes like I was, and I hope that if they are, that they catch themselves, too, and that they remind themselves that it isn’t their business, either. 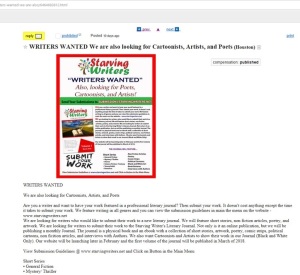 Sometimes I foolishly check out Craigslist to see if there are any writing gigs. I know better, but I do it anyway. It’s kind of like going to Applebee’s and thinking that you’ll have a good meal. Hope is eternal and stupid.

But sometimes you find something that makes it all worth it.

This particular ad is a double whammy.

First – it’s actually called Starving Writers. I suppose that’s honesty in advertising because if you submit to it, your compensation is “published.”

I’m not sure about you, but the last time I tried to get coffee by telling a barista that their compensation is that they practiced their coffee-making skills, they didn’t give me the coffee I ordered. They were even a wee bit annoyed that I had gotten them to make the coffee and then refused to pay actual money for it.

Second – they tell you that “it doesn’t cost anything” to submit your work to them.

After I finished making a little altar to worship their absolute kindness and generosity, I tried this with a contractor. I told them that I wouldn’t charge them to give me a quote on doing work around the house, and I wouldn’t even pay them for their work once I hired them. I’m not sure what their problem was, but they refused to even come to my house! I don’t get it. Why weren’t they totally appreciative of my willingness to take their work for nothing?

I’m 100% behind writers helping writers. Getting the names of other writers out in public, championing other writers’ work, reviewing books that you enjoy. These are all ways to help out and get writers the audience they need and deserve.

As someone who ran a small press for almost 10 years, I paid my writers. I didn’t make any money. I bought a few stories each month – $25 for short stories, $10 for flash fiction.

The stories appeared online, and once a year, I created a print anthology. Each author got one, plus the option to buy more and sell them. I finally turned a profit on an anthology, “Loving the Undead. An anthology of romance…sort of.” It wasn’t a huge profit, but it encouraged me.

I kept the press going until I couldn’t pay my writers anymore. Due to some health issues, I couldn’t work as many hours and couldn’t afford it. But I didn’t ask them to work for free.

Writers need to support each other, and that means in all ways, including financially. Buy their books, buy their anthologies, subscribe to their Patreon accounts, and join in on their Kickstarters. Writers do this to earn a living. They need to pay bills, just like everyone else.

[I do want to mention that I am also completely behind the idea of anthologies and books that are published for fundraising for various purposes. I organizations who make money from charity anthologies. They often get big name authors to help champion their cause and raise awareness. That is very different.]