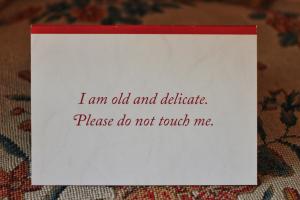 I’m not sure why it’s socially unacceptable to *not* want to hug someone. Why do we expect people to hug when they meet or when they part?

I mean, I get it if you’re trying to check for weapons or a wire. If I were a mobster, I’d hug the hell outta anyone who came by to talk to me. Groping would not be out of the question.

But I’m not a mobster.

My friends (to the best of my knowledge) are not mobsters either.

That rules out all the reasons to give me a hug.

I’ll repeat it one more time for those in the back.

This cabin was in the woods, which had me really hopeful.

But it was not haunted. Not even a little bit. No ghosts or ghouls. No spirits or spooks. Not even a friendly (that turns evil at night) wood nymph hiding in the trees around us.

I don’t ask for much, but since there was no haunting, perhaps the owners could have at least come by and rattled some branches and moaned and knocked around the house. Give it the appearance of other-worldly presences. It was not to be.

It still had promise, though. We were out in the woods, and there were lots of power stations. All it would have taken was a simple error, and we could have been besieged by atomic bugs that grew to ginormous sizes and needed to be defeated by the army.

Sadly, that didn’t happen either. There were a couple of roaches that came out in the kitchen at night, but nothing worth calling home about. And they definitely weren’t unusual in size. Just normal, boring run of the mill cockroaches.

I admit, I still screamed like a little girl and hid from them, but only in the normal oh my god it has wings and can fly way, not in a screaming in terror at a biologically impossible massive cockroach crushes the car and leaves you stranded while other massive cockroaches attack the house, forcing you to climb into the bathtub and pray for your life…

Which reminds me of another problem. The bathtub.

If there isn’t going to be some sort of wicked spirit in the mirror (and trust me, I tried all of the ones I knew about), the least the owners would have done is to provide a specter of some sort to appear in the water, maybe try to pull you underwater and drown you, make you fall asleep and dream of its life, just something scary. But nothing. Another big fail.

Overall, the cabin was nothing short of a relaxing weekend getaway, perfect for a family. And a complete disappointment for those of us who thought that a cabin in the woods still meant something.