Okay, got freaked out this morning. Admittedly, I do watch way too many horror movies, and so I automatically go to horror movie happenings

I think I’m totally justified in this freak out.

I was up in the craft room, prepping for my show this weekend (come see me at Country Side Park and give me money for goods and services).

When I heard a bang downstairs, I figured it was the cats. They always knock shit down, and since George was already being evil and pooping out what smelled like a paper rendering plant in the laundry room, I assumed it was him being more of an asshole.

Then I heard voices.

Doing the one thing that you should never do in a horror movie, I went downstairs to check it out.

The radio on the kitchen was on. Really strange because I know I hadn’t turned it on. Unless maybe I had because, you know, I admit that I’m not always fully aware of what I’m doing when I wander through the house (exhibit A: the time I put a bag of pretzels in the fridge). But still, I’m pretty sure I did not turn that on this morning.

So I knew where the voices were coming from at least. I turned it back off and went to check the alarm.

The alarm was still red, so it was on, and there were no warnings about bits being off.

Since I was downstairs anyway, I went to grab a bag of silver bead spacers I’d forgotten in my office.

Then I saw it.

The top shelf of my cabinet of curiosities was open.

I swear I hadn’t opened it. Not for days and days. Maybe even over a week now.

It’s the shelf with all my creepy toys in it.

Now I’m hiding at Starbucks doing work until I have to go back home and face the weird.

Okay, so lots of weird stuff.

While I was giving it a good scrub to get off all the road dirt, I realized there was a spider on the back of its head. After almost freaking out, I realized it wasn’t a real spider – it was a spider printed onto it. And then, as I kept scrubbing, I saw that it had a costume on.

That’s not quite as cool as a devil ducky, but it’s still kinda awesome, and so I went ahead and left it on my desk.

Then, last night, Patrick was off in California, and I fell asleep to Pysch. (Don’t you judge me. It’s one of the best ever shows. You’re just jealous.)

Around 3:15, I woke up because there was a weird sound out front. The alarm was on, so I knew it wasn’t that someone had broken in. But it was a loud almost knock. I thought maybe it was just in my dream, but then I heard it again.

I grabbed my phone for light, and I wandered out into the living room.

Moronic, I know. But it was the middle of the night, and I was trying to be an adult. Mostly because, you know, I kind of am an adult.

I saw something on the floor by the front door, and I thought, “OMG THAT SPIDER IS HUGE!” and was going to go run for a huge book to toss, but then I realized it wasn’t the right shape for a spider.

I flashed the phone light onto it, and it was the ducky. Just sitting there. On the floor. Looking all Spiderman-like and a bit creepy because the eyes were reflecting the light.

I still have no idea what the sound was, but I’m assuming the ducky got there thanks to the love of one of the kitties. Probably George because he is evil like that. Or maybe Molly knocked it off the desk and Sammy batted it into the hall. No idea. But I couldn’t get back to sleep for a while.

Just to make sure I don’t get another middle of the night freak-out, the ducky has found his place in the cabinet instead of on my desk.

Anyway, no, it was this little red devil ducky I saw by the side of the road.  It made me all sad – the poor little ducky had been abandoned! It also totally intrigued me. Who abandoned it? Why was it there?

I saw it there a bunch of times. It was in the gutter by the turn onto the feeder road for 45, right by the car dealership. It never moved. But it did get dirtier each time.

I went and got it yesterday.

I know, it’s gross and disgusting, right? But I thought it would be cool for my cabinet of curiosities. It looks weird as hell, completely worn out from all the weather it saw. And its eyes did that soul-piercing thing. Okay, maybe not soul-piercing, but still. I felt bad for it.

Did someone toss it out of their car? Was someone on a bike and it fell out of their pocket as they took that dangerous as hell corner? Was someone foolishly on foot, got hit by a car, and it went flying from their backpack? No idea.

But now I have it, and I’m going to clean it up and add it to my cabinet with all my creepy toys. Go cabinet! 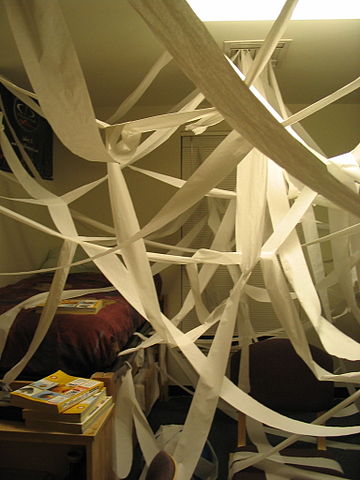 Me (carrying four rolls of toilet paper to the bathroom)

DH: Don’t use them all at once!

Me: Don’t you judge my bathroom habits!

Years ago, I worked at a local teaching hospital, in one of the graduate programs.

I guess this other employee got bored one day, so she was complaining to me about the amount of toilet paper her husband used. Apparently she wanted him to ration it out, only using a certain number of squares each time he used the bathroom. I forgot the number now, but she felt very strongly about it, and talked to me about how she made sure to not use any more than that each time. It was a pretty low – and unreasonable – number. I want to say it was four, but it may have been five.

That complaint has stuck with me for a few reasons.

First – that she would count. I mean, it was the days before cell phones, so maybe she got really bored in the bathroom. She was older, so maybe number two was a struggle for her. Counting sheets could keep her busy when she was done reading magazines.

Second – that *this* was her marital complaint. She was almost ready to divorce over it. No problems with him cheating, him spending money, him lying. Nope. Not that he did those things, mind you. He just used too many damn squares of toilet paper. And I would totally not blame him for doing any of those things, especially because that would probably mean he got to use enough toilet paper to actually wipe his ass.