Good: I’m at my last residency!
Bad: I’m in Florida!

Good: Free breakfast at the hotel!

Good: My hotel room shower is nothing like this!

Bad: The noise coming from the vent in the bathroom reminds me of this!

Good: I’ve lost enough weight/size that I can fit in the chair-desks in Reeves Theater!
Bad: I had to sit in those chair-desks for hours in partial darkness while tired and trying to stay awake!

Good: Walking back and forth between the hotel and the school is good exercise! 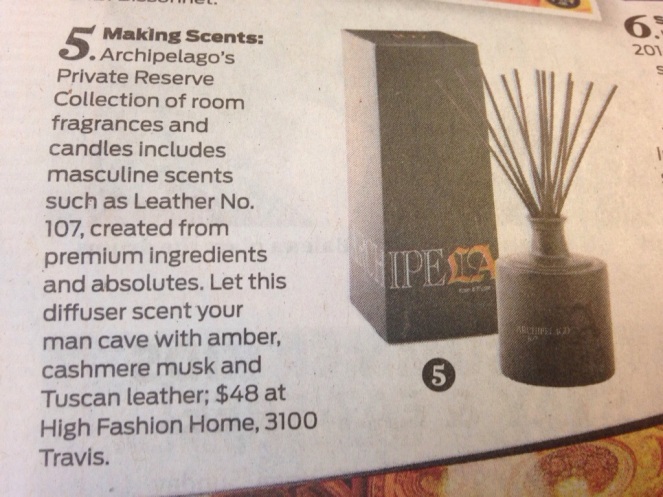 So maybe it’s just me, but I always love reading the “Style” section of the Sunday paper where they tell me how much I should spend on things. (Like $148 for a simple hat or $12,800 for a watch…both of which were featured in their what to buy for Father’s Day section.)

But the best part was when they suggested buying a scent diffuser for the man in your life. Cause every guy loooooves getting a little vase with sticks that smell good poking out of it. The suggestion isn’t as funny as the write-up, though:

Ummmm, wait. What? “Scent your man cave?” Why does that just sound obscene? I have to say, I’ve never wanted my husband’s “man cave” scented. Ewwwwww.

In “Mystery Men,” one of the characters has a very unique super power. The only-when-nobody’s-looking Invisible Boy (played by Kel Mitchell – yes, that Kel!) turns invisible, but, as you can see from his name, only when no one is looking at him. Sometimes I feel like I have a similar superpower.

Like at school. I was told I could have my first choice for second reader for my thesis. Confirmed it. Sent emails about it. Even talked to the professor I wanted as a second reader and confirmed it with him. And then I got my thesis back. The reader I was assigned to was number three on my list of three possibles. Not even my second choice. Was I forgotten? Invisible?

Another example. I was given a Christmas present by a friend. There was a problem with it, and it was returned. The replacement had the same issue. The friend told me I’d get another gift. It’s now June. I got to listen to her repeatedly discuss all the gifts she’s been buying for other people. No further mention of replacing my Christmas gift. I know I should forget it – clearly, I’ve been moved out of mind and forgotten – but it still bothers me on some level to know that I’ve become invisible.

I know, those are only two examples, and I feel like things should always come in threes.

So I will bring up a family member (who shall remain nameless in this blog, even though she knows who she is…but since I doubt she will read it, it doesn’t matter – cue “Sad Songs and Waltzes”).

Regardless, this person doesn’t always seem to forget about me since I’m out of sight. She does something I consider far worse. She forgets about my son. I remember her son and send him cards and present, at a minimum for Christmas and his birthday but honestly far more often than that. I can’t remember the last time she sent my son a birthday present. And that hurts. I don’t mind it if I don’t get a birthday present, even if I send one to her, but her not sending one to my kid…that’s a bit more unforgivable. And it’s not that I’m a materialistic money-grubber, I swear. She could send him a pack of crayons and a pad of paper, he’d love it, and she’d be out anywhere from $2 to $5. It’s the lack of thought that I find as the problem. It’s the being invisible.

I could go on with more examples, but that’s unnecessary. This was my own little pity party, and I threw it, complete with balloons and streamers. And now I can move on beyond it and think back to “Mystery Men” and Invisible Boy.

In the end, Invisible Boy saves the day. They turn their backs, and he sneaks past the cameras and gets them in. He’s completely invisible. And naked.