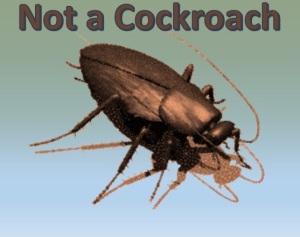 I’m the one who let the dogs out.

Actually, I let the dogs out what seems like three dozen times a day, but it’s probably a lot more than that. It’s normally an incident-free type thing: open the back door, let the dogs into the backyard, and close the door.

This morning was not incident-free.

When I opened the back door, a bug that looked very much like a cockroach but moved so fast I couldn’t be sure came running into the house.

I screamed. Holy mother of fuck, what the fuck is that?

The bug was probably just about as freaked out as I was.

It had been sitting on the back stoop, minding his own business, when suddenly this huge thing (the door) came flying at it and two massive animals (each weighing under 10 pounds, but massive compared to him) jumped over it.

I ran to grab a heavy book – a college English textbook, which honestly isn’t good for much else – and by the time I got back, the bug that could have been a roach was hiding under the edge of the dog’s chewy toy.

Clever, right? It was a smart little bug, which made me question its roach status, and I had yet to get a clear look at it.

I kicked the chew toy away and tossed the book where the roach *should* have been, but instead the little bastard was too fast and ran under the black ottoman.

I pushed the ottoman around, still holding the book, and it came out and hide under the big plush green hippo there.

Clearly, this was not a roach. Or if it was a roach, it was the most brilliant roach I had ever crossed paths with.

I decided to reason with it.

I put the book down.

Maybe it heard me and understood me. Maybe not.

But when I came back with a broom and opened the back door, it managed to get under the sweeping part of the broom and made it out the door.

It righted itself on the concrete of the back porch, and stared at me.

Was it a cockroach? Was it more than that?

I got distracted because the dog wanted to come back in, and by the time I looked back at where it had been, it was gone.

(No spider pictures were used/harmed in the making of this blog. If you really want to see a picture of scary spider stuff, go here. Otherwise, please look at this picture of pretty flowers that were on the property. And if you get the foolish idea of putting up a pic of spiders or sending me one, you will be dead to me. Dead.) 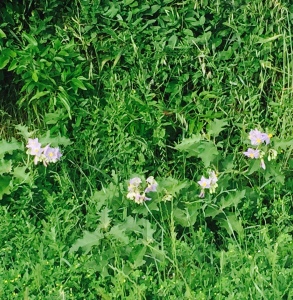 I’d been doing well at following the rule about not killing or harming any living things – including bugs. (I had not been doing as well with the whole no cursing/foul/abusive language thing. Like that’s a shock to anyone.)

But when I tried to go to the bathroom that night, I got stuck at the beginning of the hall.

Before, there’d only been one large spider on the curtain covering the window at the end of the hall. I could reach either of the two bathrooms without venturing too close, and I could keep a careful eye on it to make sure it didn’t make any threatening movements.

I got to the edge of the hallway, and there were multiple spiders – okay, two – right there.

One on each side of the hallway.

Now, when I say “hallway,” I don’t mean a huge, cavernous thing. I mean a tiny little cramped can-barely-fit-two-people-passing-in-the-night kind of hall. If I were to put a foot in the center, each spider would be inches (okay, maybe 10 inches, unless you’re a guy, then it would be fourteen inches) away from touching me.

So I stood there. I stared down the hall. I stared at the potentially 24 beady eyes (did you know spiders can have up to 12 eyes each? For real?!).

The spiders held their ground.

A newcomer was sitting on the couch, and I considered asking for her help. But the little sign in the bathroom said that “ashram comes from the word shram which means effort. Therefore, the ashram is a place to put efforts to improve yourself, understand spiritual teaching and live with discipline.” It also told me that “nonviolence is the first step of the spiritual path. To be aware of all forms of life and to walk in harmony with these living beings. This includes small bugs…”

I decided to do it.

I stamped my foot at the spiders, and luckily they didn’t run at me – they ran away! I was victorious!

So I ran into the bathroom and then dashed back out.

Except then I went to my bedroom.

I guess the bugs were trying to get away from the impending storm because they were battering the hell out of my window pane, buzzing and flapping and desperately trying to get in.

It was a little one. Kinda cute. Definitely not a threat. I ignored it as it flew around and finally settled down somewhere. Out of sight, out of mind, right?

Then, out of nowhere, another bug landed on my bed.

Like an earwig with a full-blown case of roid rage.

What could I do?

I wasn’t supposed to kill it. Plus I wasn’t even sure if I could kill it. It might take my weapon and use it against me.

While I sat there motionless and stared, trying to figure out a plan to put into action to get away from the intruder, it kept exploring my bed. It wandered into my box of colored pencils. And got stuck.

I grabbed the opposite end of the box and quickly chucked the box into the main room.

I had survived and so had the…well, I have no idea what sports figure to compare it to..ummm…Pete Rose? Mike Tyson? Some guy who took steroids or was scary or something, but in bug form.

I decided that I should go to sleep and try to ignore the bugs. I put my computer on the table next to the bed, put on one of my favorite movies, and curled up.

The aforementioned “little” and “cute” bug immediately flew into my face, landing on my cheek!

I pulled my sheet over my face, trying to sleep covered from the horror, protected from any potential future insect forays, but it was too warm for that, and I eventually had to move it.

I slept with my face uncovered. No worries about zombies that night. But plenty about bugs.