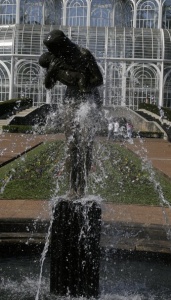 Because it’s a three day weekend, we used it the way that all super cool awesome rock stars used it. We went to three used book stores to try to stock up on books and records.

We drove out about an hour to the west side of Houston, and on the way there, we listened to our free trial of XM. “Hold on Loosely” (.38 Special) came on.

I began singing along, and Patrick ruined it for me.

I thought about the lyrics.

It totally made sense.

Into Half Price Books we went. I scanned the records while Patrick took Simon to check out the books

Couple behind me:
Guy: This is what I was looking for! It’s a Southern rock collection.
Woman: Let’s see what’s on it. (She starts reading the song titles. Stops.) Hold on loosely? Wait, is that… (And she begins singing it.)

I try to avoid laughing and keep flipping through all the records. I’m going backwards from Z, and I’m at U, discovering that someone offloaded a dozen “Utopia” albums.

Couple behind me again:
Woman: How is that Southern rock?
Guy: Mumbles. It’s sort of what I’m looking for.
Woman: But it’s not Southern! (Starts singing it again.)

They start arguing for real.

Woman: Time Life *does not* have a Southern rock mix. I remember their commercial.
Guy: I didn’t say they did. I just heard they had something with Southern rock.
Woman: But this isn’t it. (She sings even more of the song.)

I finally made it to T.

There. Right in front of me.

I didn’t buy the record.