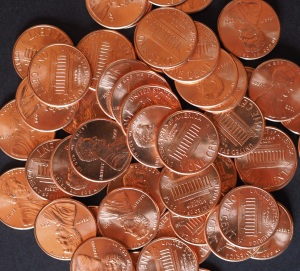 Today I saw a penny,
but I didn’t pick it up
because when I was a kid,
I learned that even
though some people thought
all pennies were lucky,
it was actually only the heads-up
ones that were.

If I picked up
this penny,
this one showing off its tail,
I would be cursed
for the day
instead of being given
good
luck.

Since I didn’t need any more bad
luck,
I went ahead and used the toe
of my sneaker to flip
the penny right-side up
on the gravel
path so the next person
to look down
and see its rusty,
crusty face
could pick it up
and have a good
day because of the luck
I’d infused
that penny with.

To the next person
at the Clark County Museum
nature trails
who looks down and spots
the penny,
and takes the time to bend down
and get it:
you’re welcome.

(And that was something completely different…I hope you liked it…)